Aru takes the lead in stamping out Elephant and Rhino poaching 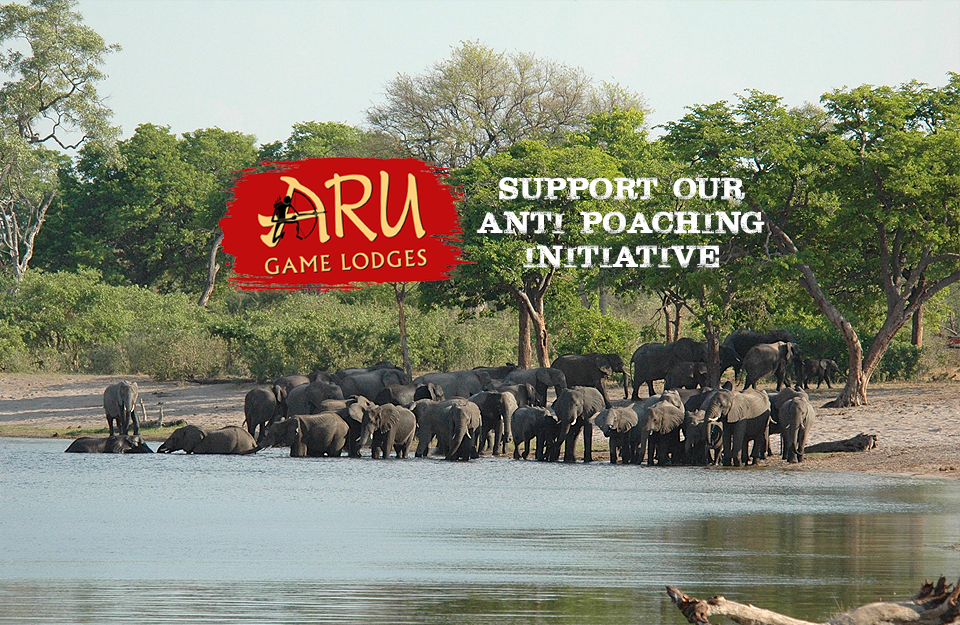 “Illegal poaching in Africa continues to be a big problem for the continent. Recent statistics indicate that nearly 35,000 African elephant a year fall to the poachers’ slaughter. That is one animal every 15 minutes, 96 elephant per day”.

To bring scale to those endemic numbers, sport hunters only take on average 140 elephant per year throughout Africa. CITES quotes are higher, but the actual harvest of this icons member of the African Big Five is quite small and nearly insignificant considering the estimated population of as many as 500,000 elephant on the continent.

Behind high game fences and guarded with mobile armed patrols, the white rhinoceros in South Africa has been making a come-back, with 20,000 animals now on a wide number of game farms throughout the country. And yet it is still not enough, as heavy poaching has struck here, too.

In 2014 alone South Africa lost 1020 white rhinoceros. This number of poached animals for the first time outpaced the population’s birth rate. Poachers, organised and funded by multi-national gangs, can’t help themselves because the lure of riches in rhino poaching is so great. Deloitte International Consulting has now uncovered and reported distinct links between wildlife, drug and human traffickers – their criminal triads are today one and the same. These professional criminal organisations move all three – humans, narcotics and illegal wildlife products. These gangs are globally connected and protected, organised, dangerous and very well funded.

Deloitte reports that trafficking in endangered species is now the fourth largest illegal business in the world…only drugs, weapons and human trafficking are bigger.

The average price today for rhino horn on the black market is $35,000 to $85,000 per pound, which is as much as $5,300 per ounce, making horn by weight more valuable than gold or cocaine. It is said that white rhinoceros carries a quarter of a million dollars around – on his nose.

Further exacerbating the problem of poaching is the involvement of extremist terror organisations. The Lord’s Resistance Army and Boko Haram earn income from poaching. The Islamic terror group Al Shabaab, who took credit for murdering 67 people at Nairobi’s Westgate Mall, earns an estimated $600,000 a MONTH from ivory poaching.

There is an old saying that “when the going gets tough, the tough get going” and that is exactly what the members of the Namibian Professional Hunters Association (NAPHA) are setting out to do with their recently announced Hunters United Against Poaching program.Making its inaugural debut at a fundraising gala in Windhoek, Namibia on Thursday evening. September 3, 2015, the Hunters United Against Poaching Trust Fund is aiming to raise a substantial amount of money to fund anti-poaching initiatives throughout the country.

According to NAPHA Vice President Danene van der Westhuyzen (who is owner of the ARU Game Lodges and an SCI exhibitor and donor), the catalyst for this worthy project lays in Namibian elephant and rhino poaching that has got to be stopped and the professional hunting industry is going to be a stakeholder to attempt just that.

As a result of the increase in poaching of elephant and rhino the past few years, as well as smaller game species, NAPHA and the Namibian Ministry of Environment and Tourism have banded together to manage the new Trust Fund that shall be used for the “establishment of anti-poaching units, the training of this force, the arming thereof and supplies and necessary equipment” to effectively get the work done. Trust funds will also be used for the annual maintenance of these units.

To endow the Trust Fund, professional hunters in Namibia have generously donated five big game hunts, ten plains game trophy hunts and ten biltong meat hunts that will be sold at auction September 3 and available internationally for purchase. For foreign bidders interested in buying a hunt, telephone bidding service will be made available.

Information on the program can be found www.napha-namibia.com.
Information is also available via email at info@napha.com.na or call the office at +264-61-234-455.

Conservation begins at the local grassroots level and the members of NAPHA and its Executive Committee have demonstrated obvious devotion to Namibia’s wildlife and superb leadership in establishing this noble project.

Please contact NAPHA for a complete auction program and then mark your calendar to bid on September 3.