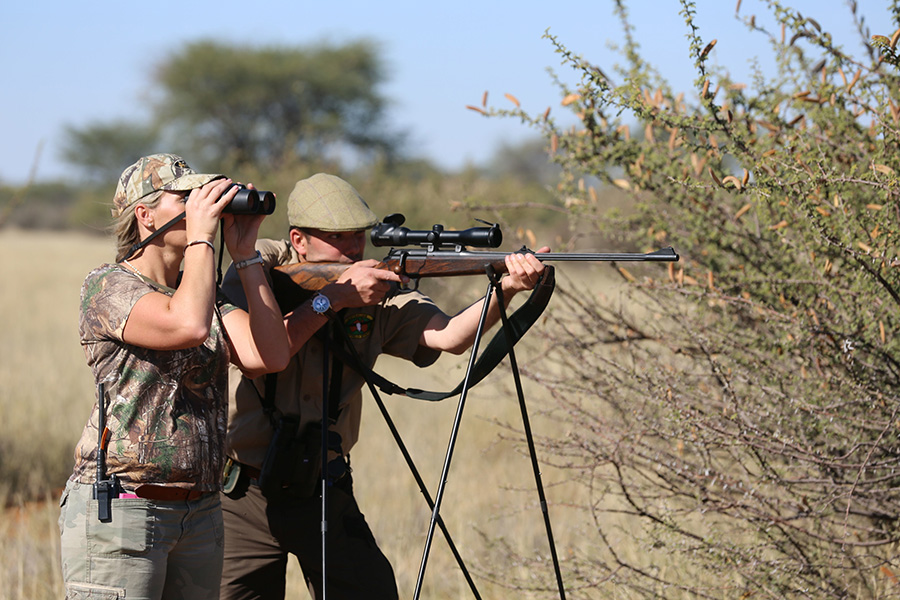 Danene van der Westhuyzen, who was mentored by her father, began hunting at an early age. Eventually her passion for hunting and a desire to bring about changes in the industry motivated her to discontinue her optometry practice, and become a professional hunter.

Obtaining a covered PH licence in Namibia requires up to six years of rigorous training and passing a series of exams. She completed her certification eight years ago and in 2012 qualified as the first female dangerous game PH in Namibia.

“Most people have lost the essence of the hunt,” explains van der Westhuyzen. “We need constant awareness of the laws of nature, and hunting is the age-old way of life that provides this.” Van der Westhuyzen sees her mission as restoring and preserving traditional, core values of the hunting heritage and her stated objective is to facilitate changes by leading by example.

[mk_blockquote style=”quote-style” font_family=”none” text_size=”12″ align=”left”]We love taking up the challenge of kudu, Hartmann’s zebra, eland and other endemic species. It’s all about translating the right experience to our clients. We work hard in the mountains and in the plains.”[/mk_blockquote]

For plains game, Aru Game Lodges hunts on privately owned areas spanning 149,000 acres, and for dangerous game hunts they have access to the Zambezi region (formerly the Caprivi Strip).

A .308 Steyr Männlicher, known as the “Black Mamba”, together with her Sako .375 is van der Westhuyzen’s choice for taking plains game. For dangerous game, she uses her Kriedhoff .450-400. Rifle hunts are conducted by stalking on foot. She also enjoys bow hunting.

Van der Westhuyzen has shared many fantastic experiences with clients and is considering writing a book detailing them. She considers the beauty of the environment as one of the often-overlooked facets of being a good professional hunter.

[mk_blockquote style=”quote-style” font_family=”none” text_size=”12″ align=”left”]To be exposed every day to something that is breathtakingly beautiful, to be involved every day in the discovery, rediscovery, and creation of beauty – this is what we cannot live or remain healthy without. Being in the presence of beauty helps restore our focus. An ancient tree; flowing water; winter’s starry nights; the francolin greeting the dawn; a lion’s mighty roar, and the rush of meerkats back into their burrows,
transform a working day into a miracle. I aim to translate this to my hunters. The specific moment when a client grasps this creates a memorable experience.”[/mk_blockquote]

Among the many clients she has guided, one is vividly etched in her memory. Her client was an enthusiastic American in his 60’s and it was his first longed-for visit to Africa. “Our first trophy was an old oryx bull taken in the late afternoon,” recalls van der Westhuyzen. “When my client whispered ‘last light, hunter’s delight’, the words impressed me. The client’s childhood dream was to take a kudu bull and the pressure was on to find a grey ghost. Our last day passed without presenting a suitable kudu. On our walk back to the vehicle, something ahead caught my eye. My driver was standing on the roof of the vehicle waving frantically trying to get my attention. On a small hill to the right there was the grey ghost. We moved swiftly and close to within 120 yards. The kudu’s head and shoulders were protruding from underneath a bush. I whispered to the client to take him. Nothing happened. The client’s fingers were white pressing against the stock. Again, I urged him to take the kudu, but he replied that he didn’t see it. I asked him to look through his binoculars and redirected his gaze. I moved the sticks to get a different angle. Immediately he saw the kudu through his riflescope. I put my shoulder underneath his arm, he pulled the trigger and the kudu went down. The client, my driver and I were overcome with emotion. Moments like this are happening every day. It just takes persistence to make them happen.”

Currently, van der Westhuyzen is Vice President of the Namibian Professional Hunting Association (NAPHA) and Chairperson of Outfitters and Professional Hunters Associations of Africa (OPHAA). NAPHA is involved in conservation, education, community and anti-poaching programmes. She is a SCI member and Aru Game Lodges is a convention exhibitor.